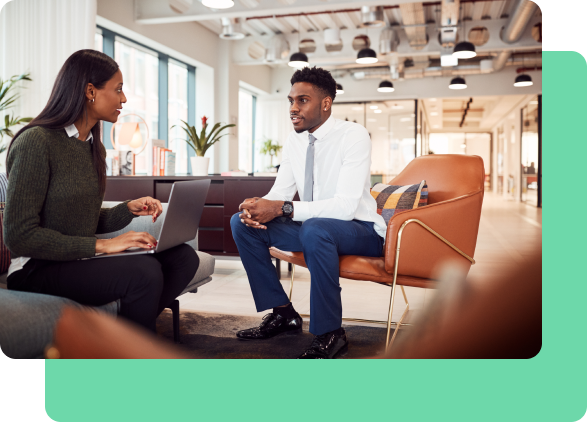 Increase in feedback given by senior developers within 1 month

Increase in feedback received by junior team members within 1 month

The Applied engineering team features a diverse range of backgrounds, which means that their team brings different perspectives to solution design. Hew Ingram, Head of Engineering at Applied, wanted to make sure that everyone was engaging in feedback during code reviews. ‍

Knowledge-sharing in a diverse team results in high-quality code and great development opportunities for the whole team. Hew and ​​Mel Schatynski, one of Applied’s senior developers used insights from Multitudes to understand feedback patterns and significantly increase the amount of feedback given by senior developers.

Mel is an experienced developer who works part-time at Applied. Given the way that their engineering team works, everyone gets pulled into larger projects – which means that at any given time, each person is often working through some significant coding questions. At the same time, the team values getting Mel’s feedback in code reviews – so she has a lot of demands on her time, and not many hours to do it all!

When Mel and Hew sat down to go through the Multitudes data together, they saw that Mel had fewer <code-text>PR Comments Written<code-text> than others on the team – she was writing less feedback on code reviews than others. That trend had been consistent over several months, and it held true even when they accounted for the part-time nature of her role.

Research shows that knowledge-sharing is important for the success and development of others on the team and helps improve code quality. So given this and the trends in the data, Hew and Mel’s 1:1 conversation turned to what Mel saw as the next steps.

Mel decided that she wanted to increase the amount of feedback she was giving in code reviews. As part of her regular goal-setting practice with Hew, she set a goal to give more feedback on PRs.

Because Mel had access to her own Multitudes data, she took ownership of checking in on her progress each week, and she was able to make shifts as needed.

“Multitudes gave me a better feedback loop on my role in the team – over just a couple weeks, I doubled the number of reviews I did for my peers.”‍

Mel made steady week-over-week improvement in the amount of feedback she gave: just three weeks after she set the goal, Mel achieved a 12x increase in the feedback she gave. In fact, she became the person giving more feedback than anyone else on the team!

As Hew said, “Multitudes showed us how we were doing with code reviews, and made it super easy for us to see the improvement over time.”

Goal-setting based on Multitudes data has been hugely successful for Applied. Next, Hew could try using My 1:1s in Multitudes as conversation starters in his 1:1 chats.  This feature identifies team members that may be missing out on feedback or at risk of burnout and suggests dynamic questions to ask the team member to learn more about the human context around the numbers.

The Applied team could also see the quality of feedback being given, using <code-text>Specific Feedback<code-text>, a new metric coming soon to Multitudes which shows how often people get feedback that is specific enough to be helpful for learning and development.