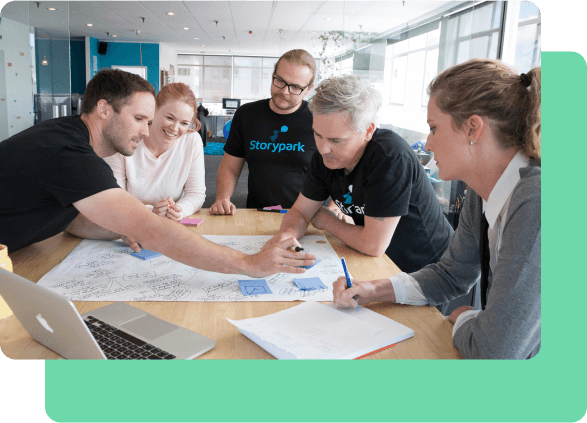 Increase in share of peer feedback to senior developers within 1 month.

Storypark — specialists in connecting families with their children's early stage learning and development — used Multitudes data to ensure senior developers were being as supported as junior developers.

Chief Technology Officer Mathew used Multitudes data to better understand how the team was working, make the case for a change in their senior resourcing, and demonstrated the impact of that decision on performance.

The Storypark team had been growing, so Mathew shuffled the team structure around to support the larger team. At the same time, the team shifted to 100% remote in response to COVID-19. Mathew wanted to know how all the changes had impacted developer performance and support.

Though the volume and speed of work stayed at about the same level through the changes, the <code-text>Feedback Received<code-text> analysis showed that senior developers were getting 30% less feedback than juniors & intermediates; when they did get feedback, 67% of it came from people junior to them — so it was less likely to be useful for their own development.

Mathew values the time that senior developers spend developing other team members, but he also wants to make sure that they get opportunities to progress in their own professional development.

Mathew decided to try an experiment: He shifted one senior developer out of the normal workflow and moved them into a “senior float” role — a role where they would “float” between teams and provide feedback or do pair programming as needed.

His aim was to see if this change would increase the support that seniors were getting and allow them to work faster. When people aren’t getting the input that they need in a timely manner, this can contribute to flow problems: Individuals start new work while they wait for input, so they end up working across a number of open issues. Working on several issues and repos requires more context switching, and that slows down the pace of the work.

“Multitudes gave us new insights and data to justify changes that created a better experience for our developers.”

In just 1 month after the change, the share of peer feedback to senior developers doubled — the “senior float” role was having the desired impact. Because Multitudes measures behaviors directly, team leads can quickly see whether their actions are having the desired effect. In this case, Mathew could see that seniors were getting more feedback from their direct peers, building their professional development and confidence.

Mathew used this data to justify the “senior float” role to the rest of the executive team — taking a senior resource out of the workflow and into a coaching role actually helped the work move faster!

As Mathew said, “working with Multitudes allowed for greater insight into our process and made us comfortable making changes to improve where we were at.”

Next, they’re curious to dive deeper into individual insights, such as <code-text>Work Distribution<code-text> for seniors (i.e., how much time seniors spend mentoring colleagues versus getting their own work done). It’s tricky for any team to get the right balance of support given versus work done, so Multitudes data can help them make an informed decision.